It’s been a while now since general audiences have accepted that comic books, as a medium, can tell worthwhile stories–Maus

won its Pulitzer Prize over two decades ago, after all. Aided in visibility by its movie adaptation, Watchmen

has even made the public think twice about the superhero genre before dismissing it out of hand. Still, these are standalone stories, and superhero comics published at a brisk monthly pace can still count on healthy skepticism from many. The Punisher, in all his violence, is perhaps the least likely suspect to be the vehicle for stories that carry a gripping message about the world we live in and the parts of it we try not to look at. 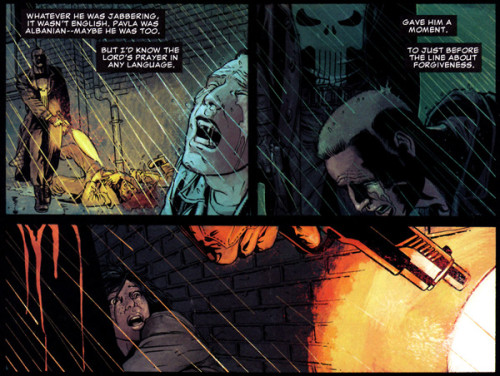 The Punisher, for any who don’t know, is Frank Castle, a former US marine who saw his family gunned down in a shoot-out between mobsters and afterwards began a violent one-man war on all criminals. In most of his stories, Castle uses conventional firearms and can only notionally be considered a superhero by the company he keeps, being a character in the Marvel Universe.

The Punisher: The Slavers

(and the entire run during which the story was serialized) removes the character to a world where such bright and shiny things as superheroes cannot possibly exist. It is a frightening world where the Punisher becomes a force of nature. Perhaps not one for good, but certainly one against the myriad forms of human evil.

Writer Garth Ennis was already coming off a long, defining run on The Punisher, characterized by the dark sense of humor which is one of Ennis’s trademarks, when the opportunity presented itself to redefine the character again under the auspices of Marvel’s new MAX imprint. MAX is an imprint exclusively for adult readers, free from the self-imposed rules of what many still saw and/or see as a children’s medium. (The first word of dialogue spoken in the first MAX comic–Alias #1–was of course “fuck”. Just to get it out of the way.) For The Punisher, this obviously meant more graphic violence, but it also provided Ennis with an outlet for the other trademark of his writing–a darkness of subject matter that is very difficult to be humorous about.

Although Frank Castle never becomes explicitly superhuman–no more than many an action movie star, that is–he is close to a force of nature, universally feared and almost unstoppable. There is an argument to be made that Castle is less the main character than the conceit used to propel other characters forward.

What makes The Slavers stand out even from the rest of the MAX run, firstly, is its subject matter. Here, Frank Castle fights not generic mobsters, but an Eastern-European slavery ring–bringing girls to the US to work in forced prostitution–that is plucked straight from the real world. Ennis is not one to shy from research for his writing, and this too is based on horrifically true crime. In many aspects, the story reads like a piece of hard journalism that uses its coating of fiction effectively–to put faces to otherwise nameless statistics, forcing the readers to confront the issues in a more direct manner than they might otherwise choose to.

Plot-wise, the things that one would expect to happen, do in fact happen. Frank Castle discovers that a slavery ring is operating in his city, sets about uncovering its members and resources, and then begins punishing in a suitably hyper-violent way.

That, however, is merely the framework of entertainment on which the rest of the tale rests, and which drags in other characters whether they come willingly or not. Through these other characters, a broader world begins taking shape. There are the victims, represented by young Viorica, who runs across the Punisher and so sets everything in motion, and the villains. But there are also two police officers and a social worker.

The latter three represent what should be our line of defense against slavery rings and any such horrors–The Slavers is open about the fact that a better world would not need a Punisher, or the fantasy of him. In reality, though–both the reality of the story and the one we live in–our line of defense falls far short. Part of that comes from corruption, part of it from incompetence, but ultimately what it comes down to is that these characters are only human.

After giving a lecture detailing some of the gruesome facts of human trafficking, social worker Jen Cooke perhaps speaks with the author’s voice when she says, “The lecture you heard today? I had to sanitize it. I didn’t want to scare people off, make it so horrific that they wouldn’t even want to think about the issues.” In other words, most regular people are simply not equipped to deal with the inhuman ruthlessness of some of the things that go on in our world, not as individuals and not as institutions. Even when genuinely giving their all, they find themselves facing situations that have already grown far beyond their capabilities and comprehension. 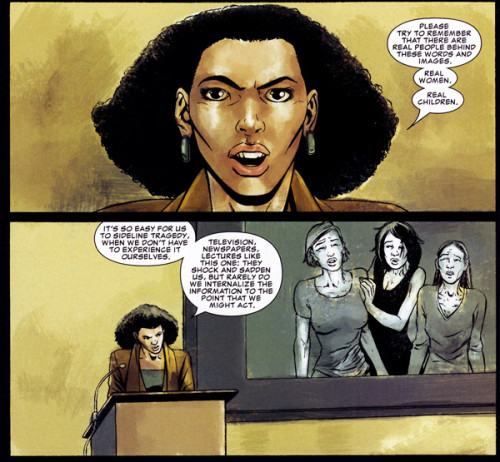 Which is where the Punisher comes in. He is a revenge fantasy made flesh, who will make the people we can’t help but feel deserve it hurt. As they run up against brick walls and costly failures, the decent characters in the story one by one compromise their ethics to seek the only possibility of justice that is left–that of the Punisher.

In the real world, we have no Punisher, and we wouldn’t be glad of it if we did. (Or would we? In some cases, it is hard to tell.) He is the engine that drives this story to an ending, if not quite to a happy one. Afterwards, the other characters are left to pick up the pieces of their principles. The world is still unchanged, still like ours. One of the police officers quits and joins the social worker in her crusade, the other carries on, because even compromised, he feels that his best option is to carry on the fight as best he can.

Even in the context of The Punisher, no one believes that Frank Castle’s way is a perfect solution. He is the extreme measure that is justified after a situation has moved past any chance of redemption. His chosen name is no coincidence, as Castle is ill-equipped–emotionally or otherwise–to do much for victims. His job is to punish the perpetrators, to go old-school eye for an eye. Treating the symptoms, rather than the causes.

The final pages of The Slavers brutally explain that even though Castle has freed a handful of girls from a life of slavery and forced prostitution, he has by no means saved them. These girls have no lives left to return to, nothing other than prostitution to fall back on. Some don’t find a new life at all and come to a miserable end, but even those who do are unlikely to ever be free of the things that were done to them.

There is an inherent warning in this story, and perhaps in the concept of The Punisher as a whole. Beware, it says, for there may be situations where any of us would like someone like the Punisher to step in, but if things have come that far, that means it is already too late. The Punisher cleans up after horrors–he does not make them vanish. The only way to do that is to confront those things that we would prefer to shy away from and work towards a world where the concept of a Punisher doesn’t have such fertile ground to grow in.

Because he was the driving force behind the entire series, it’s easy to let the bulk of the attention go to writer Garth Ennis, but it is impossible to overestimate the contribution to the story made by the stark but human art by Leandro Fernandez (with Scott Koblish on inks) and the dirty, splotchy colors by regular colorist Dan Brown. The Slavers spends significant time giving faces to statistics of crime and suffering that sadly exist in the real world, and nothing works quite so well for that as actually seeing faces and reading the anguish and world-weariness from them. The art also sets the scene in a world where nothing is clean and there are no easy solutions, and where evil people–Frank Castle included–become imposing shadows. 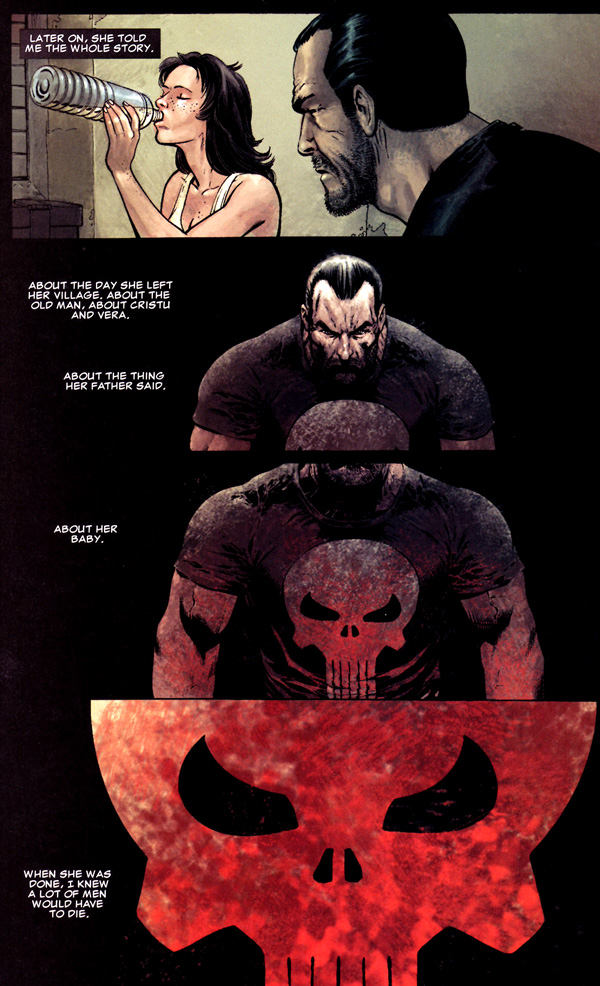 No matter anything else, The Punisher: The Slavers remains an action-packed, hyper-violent thriller–without that, it’s questionable whether it would even be a Punisher story. But because of that, the message it strives to impart manages to hit home in a direct, visceral manner. It is both a satisfying fantasy and an exposé of real-world crimes that defy the short-term solutions of the action thriller.

Let’s be clear–this is not a story that will leave the reader with a happy, comfortable feeling, aside from during the moments of primal glee when monsters who have it coming get what they deserve. But it is engrossing and not without its dry wit, and what few action thriller can claim, perhaps will even make you think about some of the uncomfortable realities of the world in which we live. It can be no coincidence that the story arc following The Slavers is the one in the MAX series which most hearkens back to Garth Ennis’s previous, darkly humorous take on The Punisher–one can only imagine that the writer needed a break after the intensity of The Slavers as much as the reader will. 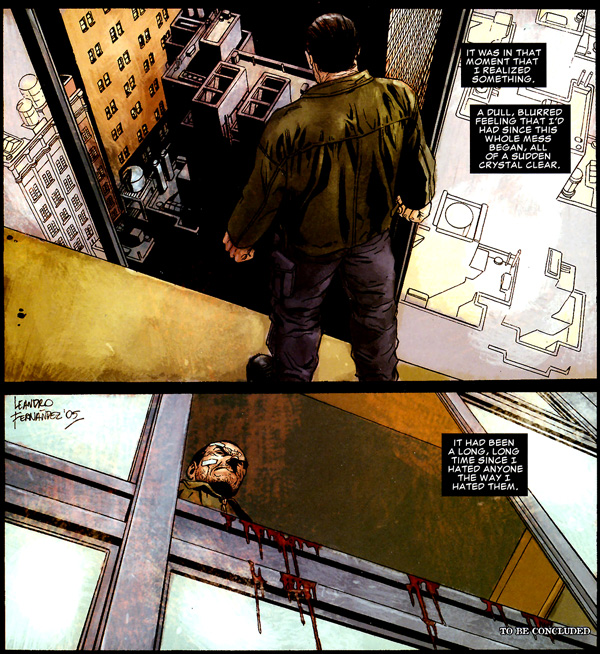 : Although The Slavers is a highlight, the entire 10-volume run of the series is worth checking out.
Battlefields

: This anthology of war stories written by Garth Ennis and illustrated by different artists is sometimes darkly humorous and sometimes simply dark. One thing it does not do, is glorify the excesses of war. (Read the author’s notes and discover that all the moments you thought were over the top were exactly the ones based on true accounts.)
Fury: My War Gone By

: Frank Castle makes an appearance in this story, also by Garth Ennis (with artist Goran Parlov) and from the Marvel MAX imprint, but it focuses on spy and soldier Nick Fury as he lives from one war to another through half a century, and his first-hand experiences paint a damning picture of an emerging industry of war which begins to create its own markets.