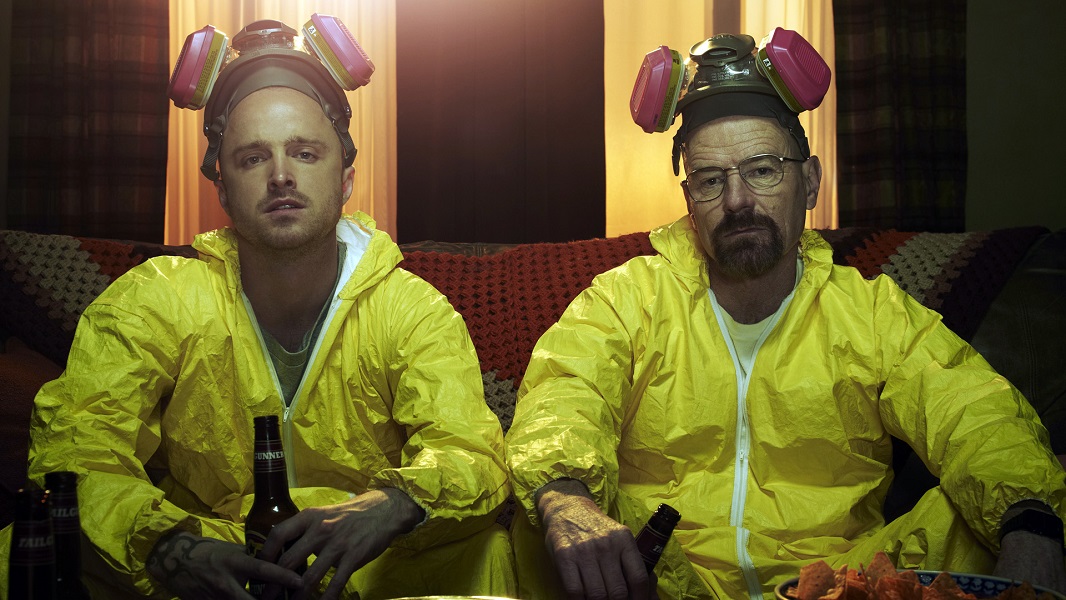 to be the best show on TV at the moment, an honour which has previously fallen on such classics as The Sopranos

. And truth be told, it has much going for it: an intriguing premise, great characters and performances, wonderful cinematography, and a plot that manages to stay fresh and raise the stakes with every new episode. As with The Sopranos and The Wire, comparisons with the plays of William Shakespeare can be made. In Breaking Bad you can find echoes of character and plot of, amongst others, Macbeth

. In this article, we will look at some similarities with another play about power and human folly, Richard III

. Of course, we can’t discuss this without a few SPOILERS.

Breaking Bad is about Walter White, a mild-mannered chemistry teacher who learns that he has inoperable lung cancer. After a chance encounter with an old student, drug dealing Jesse Pinkman, he decides to start cooking methamphetamine to pay his medical bills and provide for his family after his death. As his star rises, he becomes embroiled with drug cartels and the DEA (led by his brother-in-law Hank), but manages to overcome his enemies with his intelligence, determination and manipulation. Walter White is played by Bryan Cranston, better known as the quick to panic dad Hal from sitcom Malcolm in the Middle

. At first, as Walter is coping with his circumstances and during his occasional freak-outs, it is hard not to be reminded of Hal (see “The Comedy Stylings of Walter White” at the bottom of the article), but quickly Cranston completely convinces us with his subtle performance of a layered character.

In Richard III the titular character is the youngest brother of King Edward IV. Richard is not satisfied with his lot in life, with no direct line to the throne and bitter about his physical deformities. A fiercely ambitious man, Richard plots his way to the top, killing those in the line of succession and manipulating others to support his cause. In the end, he is left with precious few friends and a rebellion on hand. His ambition and scheming have helped him to ascend the throne, but they could not help him keep it.

No, still not happy. Ian McKellen as Richard III in the 1995 adaptation © United Artists

Both Breaking Bad and Richard III have as their protagonist a morally dubious man with high ambitions who manipulates family, friends and foes alike to protect his own interests. Of course, these elements are not restricted to Breaking Bad and Richard III and in a lot of ways the two are dissimilar as well. There are many plot points and characters from Breaking Bad that can´t be traced back to Richard III and it is by no means an adaptation of the play. Still, there are some interesting similarities in plot elements and character traits that make one wonder whether the creator of the show, Vince Gilligan, was in some ways inspired by it, even if it was only subconsciously.

The inciting incident in Breaking Bad, the thing that sets the plot in motion, is when Walter learns he has lung cancer. Faced with the fear of leaving his family with nothing more than a huge debt racked up by medical expenses, he looks for a way to earn a lot of money and finds it in a life of crime, using his skill as a chemist to cook meth. Richard III, on the other hand, is born with an affliction. In his opening monologue, he calls himself “deformed, unfinish’d, sent before my time; Into this breathing world, scarce half made up”. He believes his condition limits his possibilities, and “since I cannot prove a lover,” he says, “I am determined to prove a villain” (Act I, Scene I). Though the motivations of the two characters are different, in both cases their affliction acts as a catalyst for their actions and as a tool to garner sympathy and deflect attention from their true ambitions. 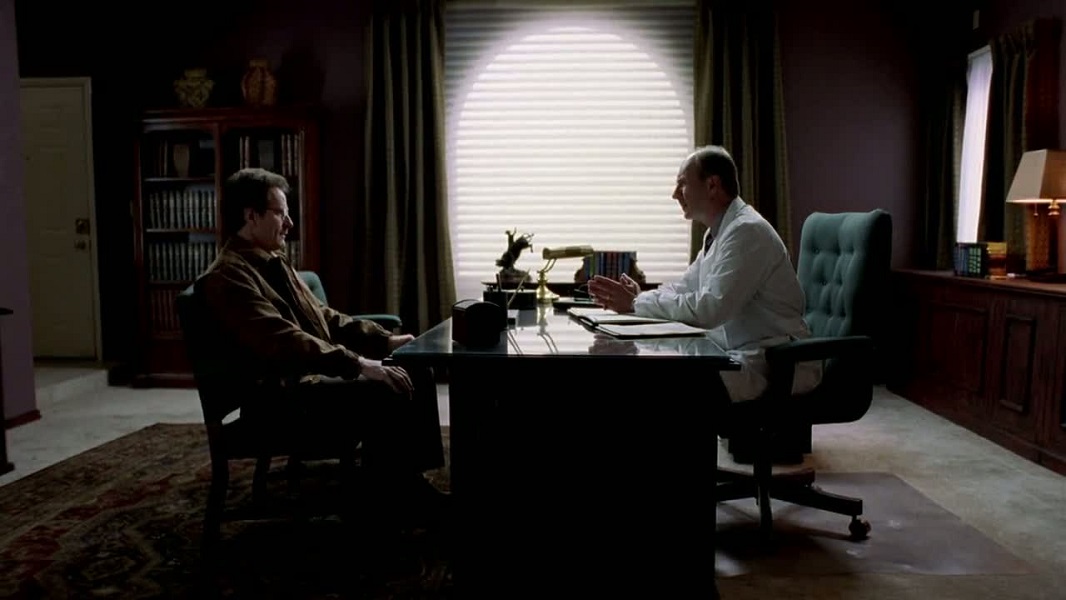 Walter learns of his cancer © AMC

The exact nature of Richard’s condition is not clear, but one of the possibilities is cerebral palsy, a motor dysfunction that affects muscle control, posture and movement. In Breaking Bad, Walter’s son, Walt Jr., suffers from this condition, though it has no bearing on the plot and has no function other than perhaps to generate even more sympathy for the family. Is it merely a coincidence or is it a subtle reference by Gilligan?

Both characters are being driven by their ambition and pride. For Richard it is his lust for power, his desire to be both feared and loved. He is proud of his own abilities as a schemer and manipulator, such as when he persuades Lady Anne, the widow of Prince Edward, son of the former king, to marry him and afterwards proclaims:

Walter is driven by his need to provide for his family, but also his pride as a teacher and scientist who always strives to deliver the best product. Under the pseudonym Heisenberg he has taken to fabricate and distribute the purest meth on the market. His pride in his product and his reputation is never clearer than in this little piece of brilliance:

Scheming to the Top

Both characters are very smart manipulators who can think a few steps ahead, play their enemies against each other, and persuade others to act against their own interests. Richard, for instance, manages to set his oldest brother, King Edward IV, against his other brother, George. Later, he arranges to have George and his two nephews killed. Similarly, Walter manages to deceive his own family and that of his brother-in-law, who is on the hunt for the fictional Heisenberg. He also manipulates his rivals into attacking each other, such as when he helps old, wheelchair-bound Hector Salamanca kill his enemy Gustavo Fring in spectacular fashion:

Walter does not shy away from violence himself, when he deems it necessary. In order to get his unreliable and conflicted partner Jesse back on his side, he poisons the son of Jesse’s girlfriend and lays the blame elsewhere. The ruse works for a long time, but backfires when Jesse finally finds out the truth:

Despite her knowledge of Richard’s character and his role in her husband’s death, Lady Anne agrees to marry him. Her motivations are political, as the marriage will keep her safe and in good position, but she also has a more vengeful reason:

“This was my wish: ‘Be thou,’ quoth I, ‘ accursed,
For making me, so young, so old a widow!
And, when thou wed’st, let sorrow haunt thy bed;
And be thy wife–if any be so mad–
As miserable by the life of thee
As thou hast made me by my dear lord’s death!” (Act IV, Scene I)

It is her intent to make Richard’s life as miserable as her own. Even after her death, the ghost of Lady Anne keeps haunting Richard.

When Walter’s wife Skyler finds out about his side activities, she acts out in different ways. She lashes out at others, sneaks a cigarette here and there and, most dramatically, she cheats on Walter with her boss and kicks him out of the house. In the end, however, she takes him back and tries to cope with the situation she now finds herself in the best she can, even helping Walter launder his money. She does this not out of love for Walter, as their relationship remains strained, but simply to protect her family:

Both Richard and Walter are characters whose motivations and actions can rarely be considered good or morally just. Richard is clearly a villain, something he himself attests to in his opening monologue. Yet, at the beginning at least, we still have sympathy for him, even root for him to succeed. We can appreciate his cunning and his wit, and we feel sorry for his medical condition and the way he feels that he is not appreciated. Walter starts out as more of a good guy, a relatable character, stuck in a job which is below his capabilities, who learns he is soon to die. How can you not sympathize?

However, as both characters follow paths that lead them further towards their goals they are simultaneously moving farther away from our sympathies. When the dead bodies start piling up it becomes increasingly difficult to identify with the characters and keep supporting them. In this regard, Walter has made the greatest development. He has changed from a cancer-stricken family man into a ruthless criminal, one whose actions resulted in the deaths of many, including innocent children (you might want to ignore the tagged on “alternate ending” from 0:28 onwards; or not, if you want a good laugh):

It is a testament to the writers that they manage to continue to make the character of Walter not only intriguing but also sympathetic. He is a man in over his head who needs all his wits to survive, and often he gets dragged into situations he has little control over. He started with good intentions and  is distraught by the deaths of innocents (like Jesse), but he understands and accepts (unlike Jesse) that sometimes bad things happen, whether by necessity or by accident. He is a pragmatic, where Jesse acts more as a moral compass to remind us of all that’s wrong.

All Hail the King

Like Richard, through manipulation, determination and cunning, Walter manages to reach the top of the heap, emerging as a king of sorts. However, his reign his short and troubled. Richard had to contend with rebellions, first by his once most loyal friend, the Duke of Buckingham, later by the former king’s nephew, Henry Tudor, the Earl of Richmond. Unlike Richard, Walter had an exit strategy. He sold his drug business and meth recipe and planned on retiring rich. Of course, things never go as planned, especially not on cable TV, and he keeps on getting dragged back into the criminal world. And as the show comes to a close, it seems that his old partner and protégé Jesse may adopt the role of Richmond and be the cause of Walter’s downfall.

The last few episodes will show us whether or not Walter will meet his end at his very own Battle of Bosworth Field; whether or not he is willing to give up his kingdom for a horse (or other means of speedy transportation); and whether or not we as the audience will be able to accept the potential fall of Walter White as we do that of Richard III.

After all, is he really the one we should be rooting for?

The Comedy Stylings of Walter White

If there’s one thing Bryan Cranston showed us in Malcolm in the Middle, is that he knows how to panic and freak out. He has brought some of that manic quality to the role of Walter White:

Some have noticed links between the characters of Walter and Hal, leading to hilarious theories and video mash-ups of the two shows:

Breaking Bad itself is not without its comedic moments, as this compilation demonstrates:

It has inspired some to reimagine the show as a sitcom:

And as a romantic comedy: