Not many people are familiar with Iranian cinema. This is a shame, because Iranian cinema has a rich past and up to this day interesting and provocative films are made. But because I myself find immersing into a new culture something that can be very daunting, I thought a list would be nice to get other people started There is just one problem. To do justice to Iranian cinema it has to be defined first. What is Iranian cinema?

Most of the films that are on this list, for instance, are not made in Iran. Does that mean that they are not Iranian? It’s difficult. I myself draw the line at the subject matter. Roland Emmerich for example is a German director working in America, but it’s hard to argue that Independence Day

are German films. So I ask myself the following:

Does the film try to convey something cultural about Iran?
Is the filmmaker of Iranian descent?

If both questions can be answered with yes, then I would classify the film as Iranian. I understand that this definition can not be applied to every nationality, but the Iranian cinema is special. Many artist had to flee their country after the revolution and they are scattered all over the world. So the films in question may be an American or French production, but their message is about Iranian history and culture or the filmmakers’ role in it.

This film shows that until the revolution in 1979 the Persian people grew up watching Western films. The director and narrator Mehrnaz Saeed-Vafa used to go to the cinema with her father watching American movies and those of Jerry Lewis in particular. That is why she tells her life story, and the changes she had to go through after the revolution, through her love for Jerry Lewis. The documentary is great as both an introduction to Persian culture and history and the phenomenon that is Jerry Lewis. A film that is so personal and at the same time universal is very difficult to achieve, but Saeed-Vafa pulls it off. It is a remarkable portrait of (and by) a remarkable woman.

A film that is both gut-wrenchingly beautiful and beautifully gut-wrenching. It tells the true story of a liberal but non-political poet (played brilliantly by the legendary Iranian actor Behrouz Vossoughi) and his beautiful wife (Monica Bellucci in perhaps her best role) who are torn apart after the revolution. He is locked up on false charges because of a personal vendetta of a high-ranking official. He is released after twenty years only to find that the Iran he remembers does not exist anymore and that his wife has left the country. Director Bahman Ghobadi already showed in his breakthrough film Turtles Can Fly

, where he combines children, a mine field and the Iraq war, that he doesn’t shy away from political subjects. This film is no different. The treatment the lead characters have to undergo is horrendous. The scariest part is that in a way every character’s actions are understandable, even those of the antagonist, played to perfection by the Turkish Yilmaz Erdogan. What Rhino Season shows is the similarities between oppression, be it from the Shah or the Ayatollah.

I once heard an Iranian director say that one of the signs that you’ve made a good Iranian film is when the government bans it. He was very proud that all of his films had passed that important test, but saddened that only people outside of Iran could enjoy his films (it’s better not reveal his name, considering he still lives in Iran). A Separation

is the exception to that rule. The Iranian government even submitted it to the Academy Awards and, low and behold, it won. The difference between this film and the rest of the films in this article is that A Separation is not about the revolution, but about everyday problems. But, despite avoiding criticizing the government, the production was still halted for several weeks when director Asghar Farhadi criticized the arrest of several directors, including prominent filmmaker Jafar Panahi (see Offside below for more on him), for making propaganda against the government. Luckily the authorities eventually decided that they could continue the production. In the film, a married couple is arguing about the future. Should they emigrate to a country which holds a better future for their child or should they stay to take care of the man’s father, who suffers from Alzheimer? Added to this dilemma is a murder charge leveled at the husband after an argument leads to a fatal accident. A Separation is a great film on many levels: the drama is so palpable thanks to the great acting; the plot is so universal that cultural boundaries disappear; and, most of all, the direction is so efficient and clean that it lifts the film from good drama to a cinematic masterpiece. The best aspect of the film is the way it shows how ordinary people live in Iran, what they talk about when politics does not play a part, and seeing once again that humans have more similarities than differences.

Yes, another biographical tale of the changes Iran went through following the revolution of 1979, but this animated film is so funny, beautiful and relatable that it was impossible not to include here. Based on the graphic novel by co-director Marjane Satrapi, Persepolis

tells the story of a young girl, perhaps not surprisingly called Marjane, from an upper-class pro-Shah family who has to get used to both the changes implemented by the new regime and the changes every girl has to go through. Her parents try to protect her by sending her to high school in Switzerland, but after graduating she decides to go back and attend the university in Tehran. The subject matter is very serious, but the filmmakers make excellent use of the medium and without the magic of animation this film could not have been this funny and accessible.

tells the story of young women who want to go to a football match. This sounds easy enough, were it not for the fact that in Iran women are banned from sporting events. So the girls dress up like men to see the match that decides whether or not they can compete for the World Cup. The girls get caught and start debating with the soldiers why they should be allowed to watch the game. Director Jafar Panahi, a former student of Jerry & Me director Mehrnaz Saeed-Vafa, cleverly uses this event to show the hypocrisy in Iranian society. The soldiers are no match for the clever girls. They are simply following orders. Their inability to cope with the situation only strengthens the message that changes need to be made to adapt to the modern world. Like all his other films, Offside is banned in Iran. Panahi even had to hide that he was directing the film, so they used the name of another crew member to get the permits. Of course when the film came out, Panahi’s role became clear. He was arrested in 2010 for making anti-government propaganda and sentenced to six years in jail and banned from making films for twenty years. A despicable punishment considering the humanist message that Panahi tries to convey in his films. Granted, all of his films are satirical of the Iranian regime (and worth seeing!), but they also show a deep love for Iranian culture and respect for its people. If you are interested in reading more about Jafar Panahi and how people are trying to liberate him and other political prisoners, visit this website. Besides the criticism of the regime, Offside also shows the zest for life most of the people have and the humour that can be found in oppression. Essential viewing. 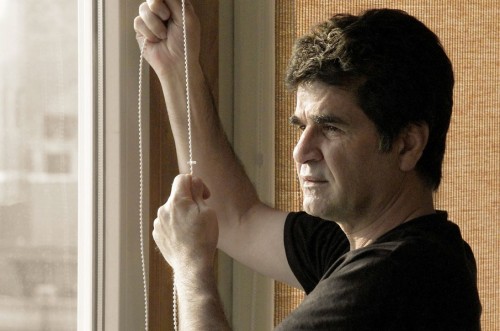