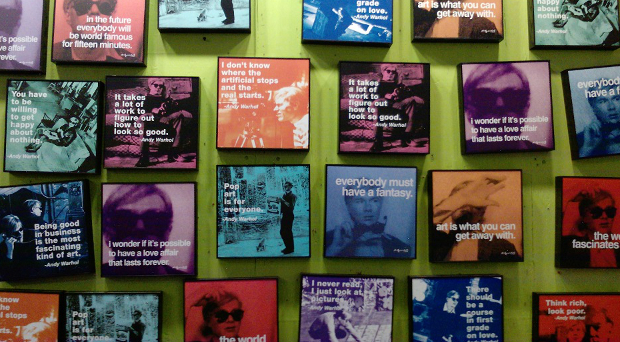 Somewhere in Toronto, Canada, there is a gift shop that has (a few years ago, at least) a wall filled with small, framed pictures of Andy Warhol. Each picture bears a quote from the artist, extolling his views on matters of art, love, beauty and reality. And while certain quotes have some value to them, others seem shallow or nonsensical. It ties in with the common perception of Warhol as a rather superficial, commercial and even dull-witted person. Rumours abound that Warhol had a low intelligence, and an oft-cited but unsourced Gore Vidal quote has it that “Andy Warhol is the only genius with an IQ of 60”. Even if the rumour has some merit, much of what Warhol has said and done has influenced modern art and popular culture.

The problem with many of the quotes attributed to Andy Warhol is that they, like the Vidal quote above, are unsourced. As Abraham Lincoln said, “the problem with quotes found on the internet is that they’re not always accurate”. Therefore it is sometimes difficult to determine what Warhol actually said and what was misattributed to him.

Warhol was often not very outspoken, preferring to hang back and observe. He could frustrate interviewers by giving slow, stuttering half-answers. One of his most famous quotes comes from the November 1, 1966 issue of The East Village Other, in an interview with Gretchen Berg:

“If you want to know who Andy Warhol is, just look at my face, or at the surface of my work. It’s all there.”

Unfortunately, it wasn’t actually Warhol who said this but, as the tapes reveal, Berg herself:

Berg condensed more of their conversation into quotes she attributed to Warhol, making him appear more thoughtful and eloquent than he was. This presents us with the seeds of doubt as to which of Warhol’s attributed quotes he actually uttered. 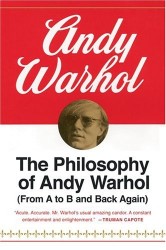 Most of Warhol’s quotes are either unsourced or come from his 1975 book, The Philosophy of Andy Warhol: From A to B and Back Again

. This book, though fully credited to Warhol himself, was actually ghostwritten by his secretary Pat Hackett and editor Bob Colacello. The material was derived from taped conversations with Warhol, giving rise to the question whether, like Berg, they had quoted him verbatim or merely represented Warhol’s intent.

To complicate matters, his quotes had a tendency to contradict themselves. Warhol was often seen as a commercial artist and he did little to dispel that image:

“Making money is art, and working is art and good business is the best art.”

Or consider this unsourced quote on publicity:

“Don’t pay any attention to what they write about you. Just measure it in inches.”

However, he would also say:

“I’ve decided something: Commercial things really do stink. As soon as it becomes commercial for a mass market it really stinks.”

Whether or not this unsourced quote is genuine might not really matter. Of course, Warhol might have legitimately felt that way at one time, but it is also very well possible that he wasn’t at all serious. As he says in The Philosophy:

There is no doubt that Warhol took a business-like approach to art. He had a background as an advertisement illustrator and retained his commercial views as he moved into fine arts, working with assistants and producing works at a high volume. His studio “wasn’t called the Factory for nothing,” as musician John Cale noted. “It was where the assembly-line for the silkscreens happened. While one person was making a silkscreen, somebody else would be filming a screen test.”

Warhol had a reason for being fascinated with commercialism, mass-production and consumerism. He believed it was an equalizing force that enabled people to want and be able to get the same things, making them essentially equals. And he believed this was nowhere more the case than in the US:

“What’s great about this country is that America started the tradition where the richest consumers buy essentially the same things as the poorest. You can be watching TV and see Coca-Cola, and you know that the President drinks Coke, Liz Taylor drinks Coke, and just think, you can drink Coke, too. A Coke is a Coke and no amount of money can get you a better Coke than the one the bum on the corner is drinking. All the Cokes are the same and all the Cokes are good. Liz Taylor knows it, the President knows it, the bum knows it, and you know it.” 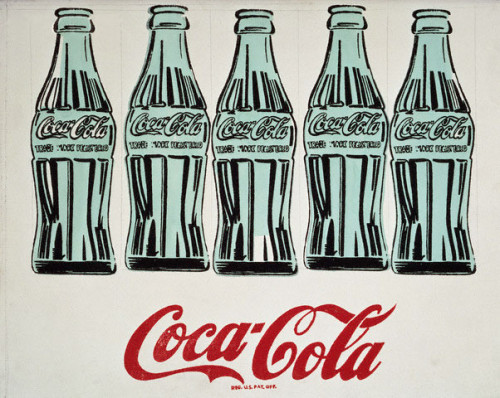 Unfortunately, Warhol’s love for the commercial tended to stretch into the ridiculous:

The inference is clear but, apart from a few American tourists, no one will believe Moscow has become more beautiful now that it has a McDonald’s. And this is the problem with Andy Warhol. As with someone like Oscar Wilde, who too has many dubious quotes attributed to him, you constantly ask yourself the question, are you serious? Is it really something you believe, or are you just saying this to get a reaction? For instance, Warhol has more to say about beauty:

“I’ve never met a person I couldn’t call a beauty.”

While some might appreciate the sentiment, it is actually a very shallow statement, a simplistic “everybody is beautiful” platitude. Later, Warhol does expand upon the subject, giving us more insight into his beliefs:

“I know a girl who just looks at her face in the medicine cabinet mirror and never looks below her shoulders, and she’s four or five hundred pounds but she doesn’t see all that, she just sees a beautiful face and therefore she thinks she’s a beauty. And therefore, I think she’s a beauty, too, because I usually accept people on the basis of their self-images, because their self-images have more to do with the way they think than their objective-images do.”

However, the two statements contradict each other, unless Warhol had never met anyone who had a negative self-image. After all, he would have called them ugly. This makes it hard to really take these statements seriously.

There are more instances where Warhol uttered clichés or tried to subvert them:

“As soon as you stop wanting something you get it.”

This or similar advice has often been given, usually to the annoyance of those it was given to. The do-nothing attitude it promotes has rarely helped anyone. On the other hand, Warhol argued against that same attitude when he said the following:

“They always say that time changes things, but you actually have to change them yourself.”

As a child, Warhol was often at home sick. Not spending much time with children his own age, he developed into a socially awkward person. Nevertheless, as he became a famous artist, he gathered many people around him, becoming a lynchpin of the cultural scene in New York. While some regarded him as charming and inspirational, Truman Capote had a different take on Warhol’s popularity:

“I’ll give you an interesting analogy here. Have you ever read Carson McCullers’ The Heart is a Lonely Hunter

? All right. Now in that book you’ll remember that this deaf mute, Mr. Singer, this person who doesn’t communicate at all, is finally revealed in a subtle way to be a completely empty, heartless person. And yet because he’s a deaf mute, he symbolises things to desperate people. They come to him and tell him all their troubles. They cling to him as a source of strength, as a kind of semi-religious figure in their lives. Andy is kind of like Mr. Singer. Desperate, lost people find their way to him, looking for some sort of salvation, and Andy sort of sits back like a deaf mute with very little to offer.” (Truman Capote, as quoted in Edie: An American Biography

by Jean Stein and George Plimpton, 1982)

One of the people bustling about in The Factory, radical feminist writer Valerie Solanas shot Warhol in 1968 because “he had too much control in my life”. The shot severely wounded Warhol and he suffered from its effects for the rest of his life. He refers to the incident (which inspired the 1996 movie I shot Andy Warhol

“Before I was shot, I always thought that I was more half-there than all-there – I always suspected that I was watching TV instead of living life. People sometimes say that the way things happen in the movies is unreal, but actually it’s the way things happen to you in life that’s unreal. The movies make emotions look so strong and real, whereas when things really do happen to you, it’s like watching television – you don’t feel anything. Right when I was being shot and ever since, I knew that I was watching television. The channels switch, but it’s all television.” 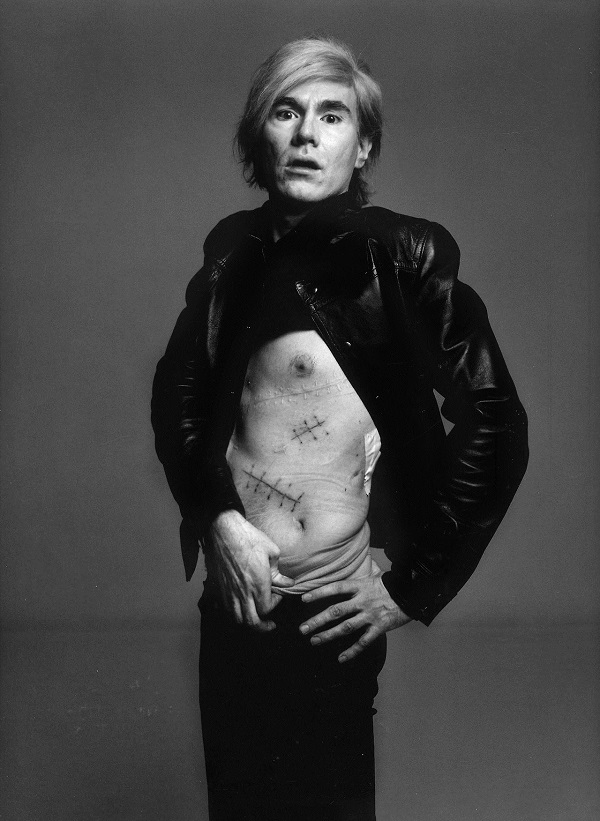 His outlook on life probably influenced the way he regarded art as well. Curiously, he was often very dismissive of his own work. In an interview with Edward Smith on BBC Radio 3 on March 17, 1981:

Edward Smith: “Would you like to see your pictures on as many walls as possible, then?”
Andy Warhol: “Uh, no, I like them in closets.”

Later on in the interview, Warhol discusses the reason why he paints as much as he does:

Again, it is hard to take Warhol seriously and you are reminded of his earlier quote about ‘putting on’ the media. Incidentally, it is easy to imagine the quote “painting is an excuse to listen to really good music” being falsely attributed to Warhol.

He goes farther in The Philosophy, where he not only diminishes his own work, but art in general:

“I really believe in empty spaces, although, as an artist, I make a lot of junk. Empty space is never-wasted space. Wasted space is any space that has art in it. An artist is somebody who produces things that people don’t need to have but that he, for some reason, thinks it would be a good idea to give them.”

It is odd then that he chose to dedicate his life to waste space and give people things they don’t need. Perhaps for Warhol it really was all about money and fame. After all, his most famous and most influential quote is:

“In the future everyone will be world-famous for 15 minutes.”

And again, he didn’t actually say this. It is from a 1968 catalogue of an exhibition of his art in Stockholm, Sweden. Whether this written quote was actually by his pen, that of Hackett or another assistant, we’ll never know for sure. Whatever the case, the phrase “15 minutes of fame” has begun to lead a life of its own, inspiring millions to signing up for reality and talent shows and brave superficiality in hopes of glory. Warhol himself enjoyed a bit more than 15 minutes, though many would still argue his shallowness and crass commercialism. Not in the least Warhol himself, as he supposedly said:

“I am a deeply superficial person.”