When the first new Star Trek film came out, I didn’t like it. I couldn’t describe the feeling, but something about the reboot really annoyed me. What could it be? It wasn’t the acting, the element I feared that would detract the most. I found Chris Pine an adequate Kirk and Zachary Quinto more than held his own as Spock, even while standing right next to Leonard Nimoy. The action was well directed, and the plot was not any more ludicrous than previous films. Could it be that the fan boy in me simply couldn’t accept the end of the Next Generation

series? Was I turning into that bitter old man that denounces everything new and glorifies the old? Probably, but I had to know for sure. So I watched the film again and to be absolutely certain I even saw the latest, Star Trek into Darkness

, and then it all made sense…The reason I don’t like them is the fact  that it has nothing to do with Star Trek. Sure, it has the space ship, the blond cocky (pun intended) captain, the rational science officer, all the works. Like René Magritte’s painting Ceci n’est pas une pipe (1928) it resembles what it emulates, but it is far from the real thing. But unlike what Magritte tried to do with his masterpiece, J.J. Abrams is not trying to subvert, he doesn’t even try to emulate. All Abrams wants is to make a film that is acceptable to the largest group of people. Where it falls short is its ambition when it comes to storytelling. Defenders of these films have said that Abrams finally made Star Trek mainstream and pulled it out of the nerd zone. My question to them is, what is so good about the mainstream? Shouldn’t some things be for some people in order for those things to have their own identity? I like my Star Trek nerdy. And if you, for instance, would call Captain Kirk Admiral Burk and the Enterprise the Endeavour, what then remains of Abrams’ Star Trek, but a decent sci-fi action film? I looked at Star Trek‘s past to find out.

The other cinematic outings of Star Trek have never been an undivided success; for every Wrath of Khan

(1998). But I accepted each and every one as a Star Trek movie. What do these films have what the last two films lack? To me it is the spirit of Gene Roddenberry. When asked to explain what Star Trek entailed he said:

So yes, The Final Frontier has many cringeworthy moments, but for every “row, row, row your boat” there is the interesting notion of what makes us human. For instance, when Spock’s half-brother Sybok offers to take away the pain of McCoy and Kirk, Kirk refuses and says

“Damn it, Bones, you’re a doctor. You know that pain and guilt can’t be taken away with a wave of a magic wand. They’re the things we carry with us, the things that make us who we are. If we lose them, we lose ourselves. I don’t want my pain taken away! I need my pain!”

There is an idea, a poorly executed one, but an attempt at understanding of what makes us human nonetheless. Before the cinephiles start foaming at the mouth, I am not saying that The Final Frontier is a better film than the two latest outings. It has serious problems, ranging from the idiotic quest for God, the sudden appearance of a half-brother for Spock, and as always William Shatner’s ego, but I saw traces of Roddenberry’s idea of Star Trek about the discovery within ourselves. So you can say it is a very poor film which is bettered by Abrams’ films by a long mile, but unlike those two films, it knew what Star Trek was and tried to uphold Roddenberry’s ideas of using fiction to search for what makes us human. 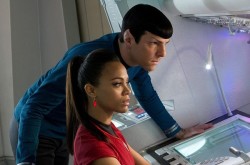 Abrams’ films do try to connect with the core audience, but their grasp of the material does not go deeper than the surface. In the first film

their ironic hipster winks are kept to a minimum. For instance, to tie in with the running gag of expendable red shirted crew members, you can see one fall to his death. Annoying and totally unnecessary. One wink I must say that works in the first film is the relationship between Spock and Uhura. One of Star Trek‘s most important achievements is that they were the first to show the first inter-racial kiss on television, namely between Kirk and Uhura. The story goes that this kiss was intended for Spock and Uhura, but William Shatner, realizing the significance of this moment, demanded to replace him. It was a nice touch of Abrams and co. to restore history in such a way. It is a shame, however, that they later reduce her role to that of the whining girlfriend. Same goes for the other women and minorities. In the latest film, Into Darkness, Starfleet Command has gathered to discuss what to do after a terrorist attack. I was astounded to see that all the people that are talking in the room were white men. No aliens, no women, only white middle-aged men It was like going back to the 1960’s. This was exactly what Roddenberry tried to get rid of.

But the element about the first film that annoyed me the most is the altered time-line. I understand that this gives them the freedom they think they need to revitalize the series, but then why follow up this film with a flimsy near-carbon copy of Wrath of Khan? Instead of breathing fresh air into the franchise, they try and fail to recreate what is seen by many as the best Star Trek film of all. The death scene shows this most of all. In Wrath of Khan, Spock saves the ship, but is trapped in the engineering room. Kirk enters and what follows is a moving exchange between two lifelong friends. The emotion is so palpable because they had three seasons of TOS and two movies to flesh out their relationship. Spock’s decision to sacrifice himself and Kirk’s emotional response (for the uninitiated, his response translates to paper as KHAAANNNNN!!!!!) corresponds perfectly with their respected personalities and it was a sad and beautiful moment in the series.

UPDATE: Thanks to the wonderful people at Reddit I was alerted to a factual error. I pulled a “To be or not to be with Yorrick’s skull” on The Wrath of Khan by adding Kirk’s outburst of rage to Spock’s death. The opposite is true. After viewing the scene again I can only say that William Shatner acts out Kirk’s grief with uncharacteristic restraint. So I stand corrected.

In the reboot they try to relive this, but for some reason the roles are reversed. This time it are the needs of Kirk that are outweighed by the needs of the many. He sacrifices himself to save the ship from being destroyed by Khan. And this time it is Spock who screams for bloody revenge. This scene goes against everything the characters stood for, for almost fifty years. Turning Spock into the irrational impulsive one is so unbelievable and his solution, to beat the living crap out of Khan, stands against everything that Star Trek stands for. And when he stops, he does not do so because using so much violence is unethical; he does it because they need Khan’s blood to save Kirk.

Last of all, I must stress the following: I am not saying that the new films are bad. If I would disregard the fact that they are Star Trek, I would say that they are decent sci-fi action films. So, if that’s your bag, go right ahead and enjoy them as much as you want. The reason I’m angry is because they used Star Trek as a vehicle for action, which is part of the appeal of the franchise, but far from everything. I miss the humanism, the optimism and the adventure. I can only hope the franchise goes back to its roots, showing us what humanity can achieve if we all work together, going where no one has gone before. Because in the end, Star Trek Into Darkness only makes me want to scream: