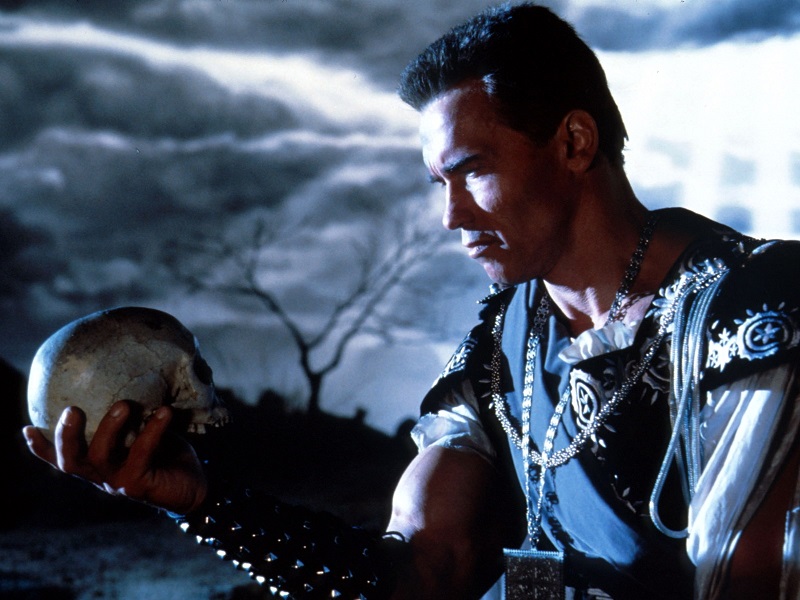 William Shakespeare has been an inspiration to countless artists and his influence can be seen up to this day. His play about the procrastinating prince Hamlet in particular has been used many times, but with very different results. Here are some examples of films that use Hamlet in different ways.

is all about subversion so turning a school performance of Shakespeare’s Hamlet, seen by many as the pinnacle of high culture, into a bloodbath fits perfectly within the franchise. It is a thing of beauty to see all the parents dully but dutifully watching until Pugsley slashes the wrist of Wednesday (a brilliant Christina Ricci). It has to be seen to be believed.

The scene works so well because director Sonnenfeld juxtaposes the proud faces of the Addams family with those of the horrified and disgusted audience. Brilliant.

John McTiernan’s 1993 flop is full of references to Shakespeare and Hamlet in particular. Last Action Hero

tells the story of Danny Madigan (or mad again? “I am but mad north-north-west” Hamlet, Act 2, Scene 2) who is obsessed with fictional action hero Jack Slater, played by Arnold Schwarzenegger, and is dragged into the world of his favorite films. The scene that most people remember is the one when Danny fantasizes how it would be if the Austrian Oak would play the Melancholy Dane. McTiernan understood the potential of this joke and milks it for everything it’s got. It starts with Danny watching an old clip of the original 1948 movie

, considered the most influential adaptation of all time, with Laurence Olivier as Hamlet. Danny is not impressed though, and does not understand why Hamlet procrastinates. He imagines an action-filled Schwarzenegger version of the film, though shot in the style of the Oscar winning adaptation.

Again, Hamlet is used as a contrast to emphasize the difference between high culture and popular entertainment. Schwarzenegger’s Hamlet reduces 3 hours of pondering to a one liner “big mistake” and throws his uncle through a stained glass window. The use of the stock sound effect called “the Howie Scream” when Claudius falls to his death is inspired (for more information on the Howie scream and the more famous Wilhelm scream, click here). It is clear that McTiernan loved making it. One nice touch he added is not in the clip, but worth mentioning. Danny’s teacher is played by Laurence Olivier’s third wife, giving the scene some extra credibility. A wonderful joke in an underrated film.

The title alone justifies the inclusion of the film, but Ernst Lubitsch’ comedic masterpiece is riddled with Shakespearean allusions. To Be or Not to Be

tells the story of a Polish theatre group who are playing, you guessed it, Hamlet. Their leading man Joseph Tura (Jack Benny) is very upset that his soliloquy (can you guess which one) is interrupted every night by the same gentleman who excuses himself. To tell why would ruin a nice surprise, but soon Tura wishes that that was his only problem. The Germans invade Poland and through the hands of fate it is up to the theatre group to stop vital information from reaching the Germans. The film is a delight and one of the most touching uses of Shakespeare’s work is at the end, when one of the actors cites The Merchant of Venice in front of German soldiers:

Lubitsch, a Jewish refugee himself, criticizes the treatment of Jews by the barbaric Nazi regime through Shakespeare’s work. Slowly Lubitsch reveals that the title not only reflects the running gag of someone interrupting Hamlet, but that it stands for a choice: to do something against the oppression, or to choose to look the other way. Chilling, hilarious and relevant to this day.

To show that they’re not just ripping of Kimba the White Lion, but Shakespeare too: The Lion King (1994)

To say that the writers of The Lion King

were a tad short on inspiration would be an understatement. Not deterred by the wasteland that was their own imagination, they looked elsewhere and found what they were looking for in Japan

. There are many articles written on the subject so I’ll refrain from rehashing what has been done so well (for instance here, here and here). A short video about the subject illustrates it enough for those deterred by long articles written by angry nerds, but are still inexplicably reading this article.

The similarities were so obvious that Matthew Broderick, who voices Ki-, no Simba, thought that Disney was remaking one of his favorite children’s TV shows. The problem is, ripping off Kimba only gave the writers the premise and some of the characters, but they had to look elsewhere for plot and found it in Hamlet: the father is murdered by his brother and usurps his throne; the son is visited by his father in ghost form who tells him that he must act to reclaim the throne.

Does this mean that The Lion King is a bad film? On the contrary, forgetting the creative black hole that is the plot, the animation is wonderful, the story is well told and the music is amazing. It would just be nice if they would give as much credit to Tezuka, the creator of Kimba, as they did to Shakespeare. Alas, copyright law prevented them from giving credit to whom credit is due.

To illustrate wasted potential: Withnail and I (1987) (spoilers)

tells the story of two British actors in 1969 London who decide they need a break from unemployment and turn to the countryside for some much needed inspiration. But their stay is not as idyllic as they imagined. What follows is one scene of drunken debauchery after another. Withnail, played brilliantly by Richard E. Grant, constantly exclaims that he’s too good for the roles which he is offered and that his poverty is a choice. But slowly the reality of life catches up with them. You can only avoid your responsibilities for so long. Again Hamlet is being used as the pinnacle of acting achievement, although not for irony but to illustrate the talent of Withnail and how sad it is that he refused to “play the game” for so long. At the end of the film, Withnail realizes how much of his life he has wasted and that unlike “I” he does not make it as an actor.

So sad, yet so beautiful.

To end on a happier note I wanted to show you one of my favorite sketches of all time illustrating that tragedy can inspire brilliant comedy. Rowan Atkinson plays the editor to William Shakespeare, played by Hugh Laurie. Atkinson has some suggestions for the great Bard, but will the fickle artist accept this?