All over the world, there are many rituals and customs intended to give a person good luck. These can be anything from encountering natural phenomena (four-leaf clovers, rainbows and falling stars) to having or receiving certain items (horseshoes, dreamcatchers, bamboo) and performing certain actions (tossing coins in a fountain, rubbing a laughing Buddha’s belly). People often have their own personal lucky possessions or numbers. Even the most rational and sceptical person can find himself picking a certain number for a lottery or rubbing an old coin for luck. Often, the actions are not performed because people actually expect them to give luck, but rather because it has become tradition, a thing you are expected to do. There are many tourist attractions which make use of this and promote some kind of audience interaction, usually with the promise of good fortune or blessing. 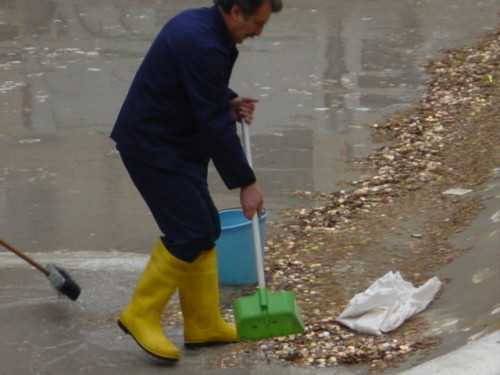 One of the most widespread traditions is for people to touch, rub or kiss a specific part of certain statues. It is not clear where this custom originated, but it has possibly to do with the worship of saints. As with places, items and relics associated with saints, statues give the worshipper the possibility to make a connection with divinity. Not merely being in the presence of, but actually touching the statue, would enhance this sensation. Such a religious origin for the custom could also explain why the most common body part to be touched is the foot. This can be due to the worshipper believing he is not worthy to touch, say, the face or hands of the saint, but it can also have practical reasons. Statues are often on a pedestal or, in churches, high up on columns and in alcoves. Also, some worshippers would be on their knees. This could make touching any part of the statue above the feet a bit difficult. 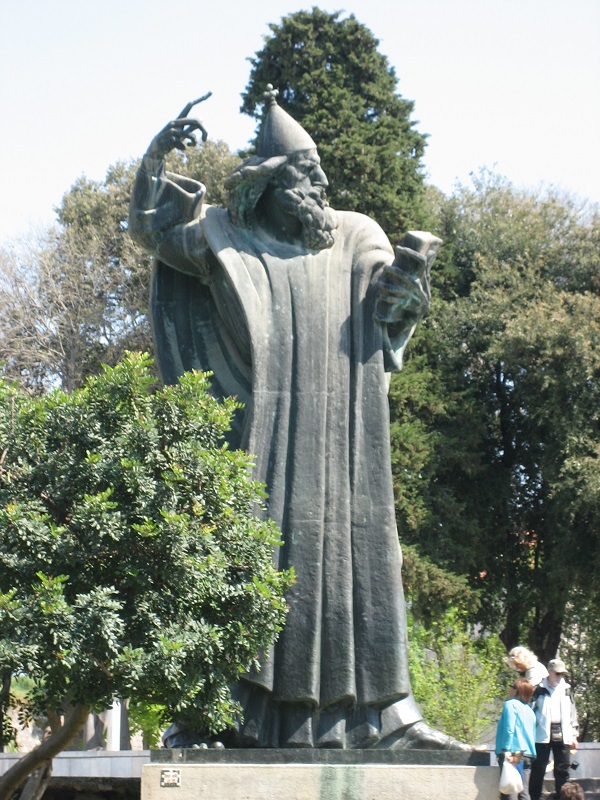 In some cases very difficult: Gregory of Nin

The custom is not limited to statues of saints and the very modest touching of feet. Abraham Lincoln’s statue at his tomb, for instance, has developed a very shiny nose. And there are other examples which push the boundaries of decency even further.

In 1937, a guard at an international art exhibition in Paris was surprised to find traces of red lipstick on the lips of the statue of Guidarello Guidarelli, a 15th century knight. Apparently, a female visitor was enamoured by the fallen warrior and kissed the statue, which was on loan from the Academy of Fine Arts in Ravenna, Italy. The believe emerged that any woman who kissed the lips of Guidarelli would become lucky in love; even find a husband within the year. Soon, many women flocked to the statue to kiss it, and over the years millions of women’s lips have touched those of the knight. Other versions of the tale date the start of the custom in the 19th century or even earlier, but these are likely later embellishments.

Though the Academy was undoubtedly pleased with the attention the statue received and the many visitors it drew to Ravenna, the nature of the attention gave them some worries. In order for it not to stain the statue, the lipstick had to be cleaned off Guidarelli’s lips every day. Unfortunately, this process wore down the marble over time, and the authorities were forced to consider more drastic measures. The statue was covered in a glass case, which was soon covered in lipstick kisses, roped off, and even temporarily removed. In 2004 the statue was restored and presently it is accessible to the public, though people are forbidden from kissing it. The statue is featured in the 1970 movie La Ragazza di Latta and in 2010 was the subject of an erotic art video, which, when showed to the museum director, shocked him. Not because it involved a naked actress, but because she dared to touch the statue. 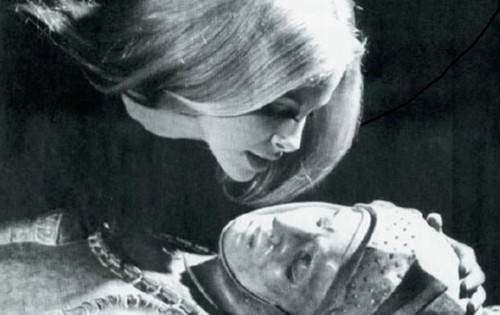 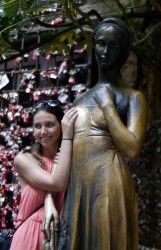 She suffers with grace

“In fair Verona, where we lay our scene…”

. The tourism industry of Verona, Italy, has smartly made use of the fact that their city is the location of one of Shakespeare’s most famous plays. It is said that a house on the Via Capello belonged to Juliet’s family, the Capulets. Never mind that the play and its characters are completely fictional (or are they? See “Family Feud” at the bottom of the article), this Casa di Giulietta has become a major tourist attraction. It features a balcony (added in the 1930’s), a wall where you can write a message to your loved one, a fence where you can, in accordance with modern custom, hang a love lock (to be bought at the gift shop), and of course a bronze statue of Juliet herself. Legend has it that touching her right breast gives one good fortune in love. Many visitors are eager to put this to the test.

As there is no statue of Romeo, no similar custom exists for him. For anyone wondering what that might have been like, look no further than the next entry.

The pseudonym of Yvan Salmon, Victor Noir was a 19th century French Journalist working for the pro-revolutionary newspaper La Marseillaise. The editor of the paper, Paschal Grousset, had ties with the radical Corsican paper La Revanche, which was in a dispute with its loyalist rival, l’Avenir de la Corse. When the l‘Avenir published a letter by Prince Pierre Bonaparte, the great-nephew of Napoleon, in which he called the staff of La Revanche cowards and traitors, Grousset challenged him to a duel. Noir and a colleague were sent to the Prince to talk terms, but a fight broke out and Pierre Bonaparte shot Noir dead. The Prince was acquitted of murder, sparking unrest across the country.

In 1891, Noir’s body was moved to the famous Père Lachaise Cemetery in Paris, which also hosts the graves of such luminaries as Frédéric Chopin, Oscar Wilde and Jim Morrison. A life sized statue marks his grave, depicting Noir as if he has just been shot. Apart from the fact that it is quite morbid that even his statue depicts him as dead (similar to that of Guidarelli which shows him as either dead or dying), visitors have also noticed a considerable bulge in his trousers. Consequently, many have taken to rubbing the statue’s crotch, as well as kissing his lips and putting flowers in his hat, all in the belief that it will improve their love and sex lives, fertility and marriage prospects. Or, at the very least, to have a bit of fun. 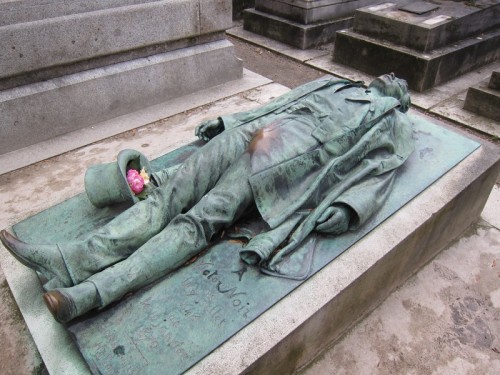 Look at him. He won’t mind.

Though Romeo and Juliet were fictional characters, there are some indications that they, are at least their families, were inspired by real life people. The play by Shakespeare was a continuation of the tale as told by 15th century Italian poet Masuccio Salernitano’s in his story of Mariotto e Ganozza, published in 1476. That story includes many elements that featured in Shakespeare’s play, such as the secret marriage and the potion plot. Salernitano claimed that the story was based on true events. In 1530, writer Luigi da Porto adapted the story into Giulietta e Romeo, which not only provided the now immortal character names, but also the names of the families, Montecchi and Capuleti, as well as various plot points. The family names appear to have been well-known. In Dante’s Divine Comedy, the Italian poet makes reference to “Montecchi e Cappelletti” (Purgatory, Canto VI, verse 107), being noble families engaged in political and religious strife in the city-states of medieval Italy. It is likely that Da Porto took the names from Dante, while Shakespeare anglicised them (in some English translations of the Divine Comedy the names are even rendered as Montague and Capulet). More versions of the story were written before Shakespeare made it world famous. And though some elements of it may be based on actual events and historical families, whether or not there was a real life Romeo and Juliet remains a mystery.