It is obvious to anyone who read any of his works that Lewis Carroll liked playing with words. Two of his favourite activities were making up new words and rhyming. When done together this resulted in the wonderful but nonsensical “Jabberwocky”, a poem about a “beamish boy” fighting the “manxome” Jabberwock with his “vorpal blade”. The poem is included in Through the Looking-Glass, and What Alice Found There

(1871), the sequel to his masterpiece Alice’s Adventures in Wonderland

(1865). But Carroll wrote many more poems. Some are collected in Rhyme? And Reason?

(1869), including one that is titled “Phantasmagoria”. This is a poem about a little ghost that visits a house with the intention of haunting it. Of course, this being Carroll, “Phantasmagoria” is more weird and funny than it is scary, a spoof of sorts of Victorian Gothic works.

The works of Lewis Carroll are fit to read for both adults and children. His poems too are very accessible, and “Phantasmagoria” is no exception. It consists of 5-line stanzas with a simple ABAAB rhyme scheme, which Carroll never deviates from. This makes the poem flow smoothly, ensuring a quick read. He avoids difficult words (ignoring for a moment the few archaisms), making it easy to read even for modern day audiences.

It is interesting to note that Carroll breaks the poem into cantos. This is usually done for long, epic poems, most famously Dante’s Divine Comedy

. In the case of “Phantasmagoria”, it lends the poem a kind of seriousness. The kind that is not to be taken too serious, as we will soon see.

“Phantasmagoria” is about a little ghost that is assigned a new duty. He is to haunt the house of one Mr. Tibbs. However, before he can go about his work, he is discovered by the house’s occupant. The supposed Mr. Tibbs is not very impressed by the ghost and asks what he’s doing in his house. The little ghost proceeds to tell the man about his duties and the rules he has to abide to. He talks about different ghosts, their hierarchy, and even reveals some things about his youth.

The title “Phantasmagoria” is taken from a form of theatre that was popular in the 19th century. Magic lanterns projected images of skeletons, ghosts and other scary creatures in order to frighten and amaze the spectators. 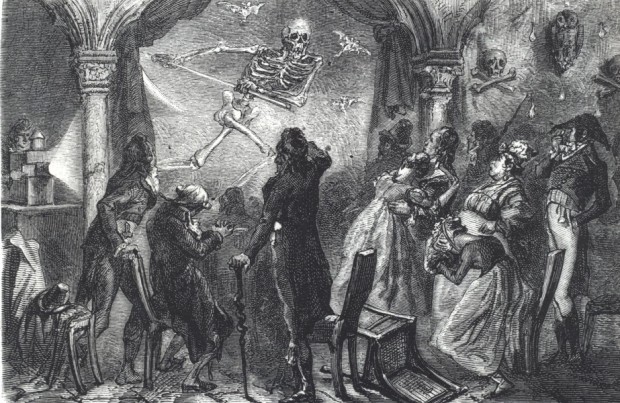 In the poem, the ghost is described as “white and wavy”, similar perhaps to what the visitors of a phantasmagoria show might have encountered. This notion is strengthened by the delightful illustrations by Arthur Burdett Frost that are scattered throughout. They show multiple scenes of ghosts going about their business of scaring people. The ghosts are always depicted as shadowy but comical-looking creatures. How they manage to frighten anyone remains a mystery. 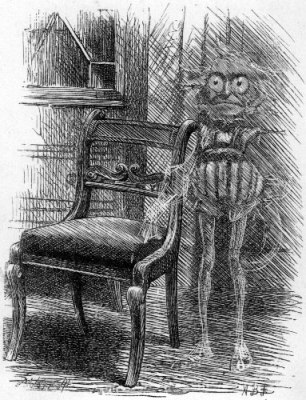 The face of terror

The poem begins with the following lines:

One winter night, at half-past nine,
Cold, tired, and cross, and muddy,
I had come home, too late to dine,
And supper, with cigars and wine,
Was waiting in the study.

There was a strangeness in the room,
And Something white and wavy
Was standing near me in the gloom—
I took it for the carpet-broom
Left by that careless slavey.

But presently the Thing began
To shiver and to sneeze:
On which I said “Come, come, my man!
That’s a most inconsiderate plan.
Less noise there, if you please!”

Once upon a midnight dreary, while I pondered, weak and weary,
Over many a quaint and curious volume of forgotten lore,
While I nodded, nearly napping, suddenly there came a tapping,
As of some one gently rapping, rapping at my chamber door.
“‘T is some visiter,” I muttered, “tapping at my chamber door—
Only this, and nothing more.”

In both cases, the narrator is confronted in his study by some spectral entity that continues to plague him. But where the raven exacerbates the gloomy mood of the narrator, pushing him to (or even over) the brink of insanity, the little ghost from “Phantasmagoria” serves mostly as a vehicle to tell us all about the secret lives of ghosts. He turns out to be a more accomplished conversationalist than the raven. With a slightly bigger vocabulary. 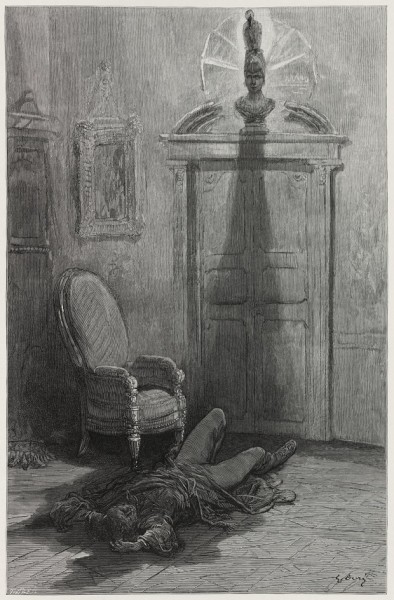 “Nevermore”
From “The Raven”. Illustration by Gustave Doré.

Poe was one of the pioneers of Gothic literature in the Victorian era. Poems such as “The Raven” and “Annabel Lee” (1849) and his many short stories – “The Fall of the House of Usher

” (1839), “The Pit and the Pendulum” (1842) and “The Tell-Tale Heart” (1843) come to mind – are prime examples. The second half of the 19th century spawned many well-known gothic novels, such Robert Louis Stevenson’s The Strange Case of Dr Jekyll and Mr Hyde

(1897) and Oscar Wilde’s The Picture of Dorian Gray

(1891). Wilde did also write a spoof on the Victorian ghost story in a similar vein to “Phantasmagoria” (see “The Canterville Ghost” at the bottom of the article).

“Phantasmagoria” was written in the middle of the Victorian Gothic period. Lewis Carroll took the opportunity to inject some social satire in a silly poem about ghosts. As they are depicted here, ghosts are part of a society not much different than that of humans. They are ordered in ranks and are ruled by a king. There are even laws and rules they have to follow. The little ghost explains them all to his host. From the third rule:

“The Third was written to protect
The interests of the Victim,
And tells us, as I recollect,
To treat him with a grave respect,
And not to contradict him.”

“That’s plain,” said I, “as Tare and Tret,
To any comprehension:
I only wish some Ghosts I’ve met
Would not so constantly forget
The maxim that you mention!”

“Perhaps,” he said, “you first transgressed
The laws of hospitality:
All Ghosts instinctively detest
The Man that fails to treat his guest
With proper cordiality.” 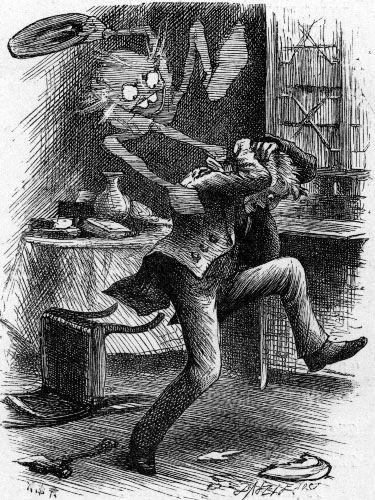 The ghost explains the hierarchy:

“A Spectre has first choice, by right,
In filling up a vacancy;
Then Phantom, Goblin, Elf, and Sprite—
If all these fail them, they invite
The nicest Ghoul that they can see.

“The Spectres said the place was low,
And that you kept bad wine:
So, as a Phantom had to go,
And I was first, of course, you know,
I couldn’t well decline.”

He also gives lively descriptions of a few of the more famous ghosts, such as the authoritarian King (who must be addressed as “Your Royal Whiteness”) and the one he calls Inspector Kobold, who prefers to haunt inns in search of port wine. 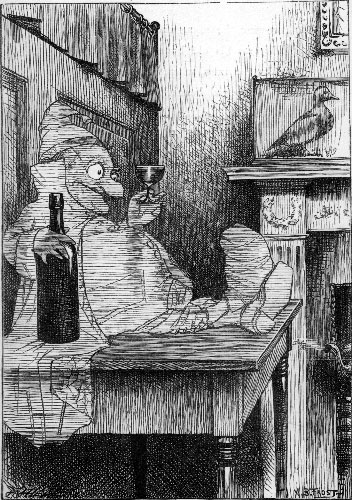 “Phantasmagoria” is one of Carroll’s works that is often overlooked. Of course, it does not have the depth of Alice’s Adventures in Wonderland or the inventive use of language of “The Jabberwocky”, but it is an entertaining and original look on the phenomenon of ghosts. It also manages to insert some social commentary into a poem which could easily have remained a shallow exercise in silliness.

“Phantasmagoria” can be found online at Project Gutenberg, but it is very much recommended to buy the complete works

of Lewis Carroll. No book collection is complete without it.

” (1887). In this short story, an American family moves into an old English country house. The father, Mr. Otis, dismisses the warning that the place is haunted, saying:

“I will take the furniture and the ghost at a valuation. I have come from a modern country, where we have everything that money can buy; and with all our spry young fellows painting the Old World red, and carrying off your best actors and prima-donnas, I reckon that if there were such a thing as a ghost in Europe, we’d have it at home in a very short time in one of our public museums, or on the road as a show.”

The ghost, who is very real, is soon driven to despair by the family’s unwillingness to be rattled by him. This produces some hilarious results. 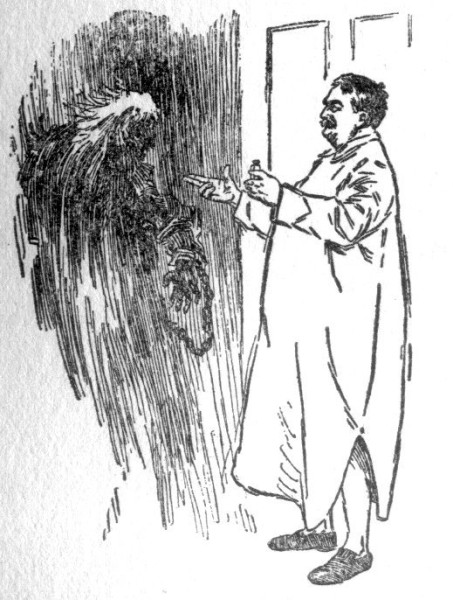 Mr. Otis asking the ghost to keep the noise down
Illustration by Wallace Goldsmith