Artists and Their Muses, and the Films They Inspired

In Greek mythology there were 9 muses, goddesses who provided inspiration to artists in fields such as drama, poetry, dance and music. Throughout the ages, artists have often been inspired by their own, real-life muses. Dante had his Beatrice, Petrarch his Laura; Salvador Dalí had his wife Gala, and everybody had Kiki de Montparnasse. Sometimes the relationship between the artist and the muse is so interesting that it in turn inspires others. Below are a few couplings whose stories were turned into films. 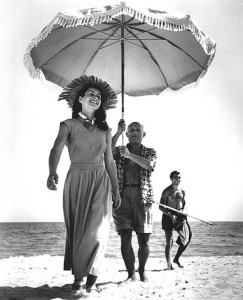 There were many women in the life of Pablo Picasso. Most of them were more than just his lover; they were his inspiration and his models. A few of the portraits he painted of these women are among his most famous works. Young blonde Marie-Thérèse Walter was the model for Le Rêve (The Dream, 1932) and the dark and troubled artist Dora Maar is of course known from Dora Maar au Chat (Dora Maar with Cat, 1941). In 1943, Picasso met then 21-year-old Françoise Gilot and took her under his wing. For ten years they were lovers and worked on their art. She bore him two children but they never married. Frustrated by his abusive nature and affairs with other women, she finally left him in 1953. The 1996 Ivory-Merchant film Surviving Picasso

tells about the relationship between artist and muse from the point of view of Gilot. It also features several of Picasso’s other muses such as Maar, Walter, and Russian ballet dancer Olga Khokhlova, who was still Picasso’s wife at that time. The film is notable for being the big screen debut of Natasha McElhone as Gilot, who holds her own next to Anthony Hopkins as Picasso.

Andy Warhol liked to surround himself with people of all colours and stripes. His studio, The Factory, was often brimming with other artists, models, socialites, patrons, actors and musicians. Warhol promoted the idea of celebrity and preferred to call his entourage ‘superstars’. One of the most famous of these ‘superstars’ was Edie Sedgwick, a young socialite from a rich family with a troubled past. She and her siblings had a love-hate relationship with their abusive father, who openly had affairs with many different women. One of her three older brothers committed suicide after coming out as gay to his disapproving father; another died in a bike crash. Her older sister broke all ties with the family. All suffered from mental breakdowns. Edie too had psychological issues, as she developed anorexia at an early age and even spent time in a psychiatric hospital. Edie moved to New York in her early twenties to get away from her family and fall in with the bohemian crowd. She met Warhol in 1965 and he cast her in small roles in a few of his experimental films. People liked her appearances so he decided to give her starring roles. The first of these was in Poor Little Rich Girl, which basically shows Edie going about her life and talking with off-camera friend Chuck Wein. Through her films and association with Warhol, and her distinctive fashion sense, Edie became well-known in the art circuit. She continued to be plagued by mental problems, though, and abused alcohol and other drugs. Her relationship with Warhol soured and he stopped using her in his films. She tried finding other acting work, even auditioning for a Norman Mailer play, but did not manage to land any roles. She died in her sleep at the age of 28 from a probable overdose. 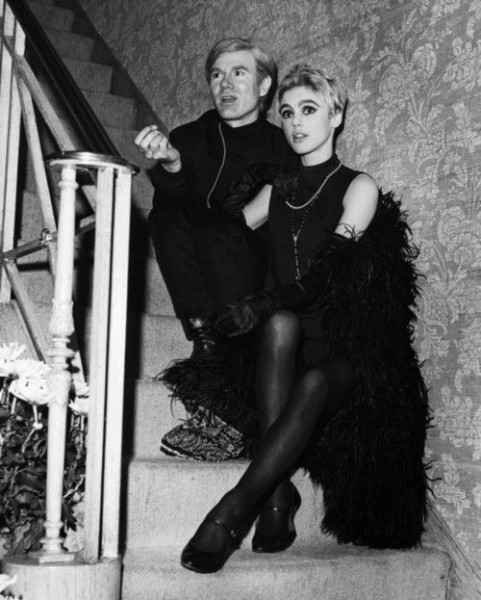 , with Sienna Miller and Guy Pearce as Andy Warhol. The movie takes some liberties with reality and shows Warhol as more of a possessive person, jealous that Edie spends time with other men, even though as a gay man he has no romantic interest in her. In real life Warhol seemed to have been more indifferent, using Edie as long as she was useful and manageable.

One of the most discussed relationships between an artist and his muse must surely be that between Lewis Carroll and Alice Liddell, the inspiration and title character of Alice’s Adventures in Wonderland

. Carroll first encountered the Liddell family in 1856, when Alice was only 3 years old. He became good friends with the Liddell’s and often took the young children in boat trips. It was during these trips that Carroll entertained the children with his fantastical stories. Alice begged him to write them down and he did, first in 1864 as Alice’s Adventures Underground and finally a year later in their definitive form. It is often speculated that Carroll was sexually or at least romantically attracted to Alice. This notion is reinforced by photographs he took of the young girl that some interpret as being sexually suggestive. However, photographs like these were common in that era an there is no definitive proof that there was more than a genuine friendship. The 1985 film Dreamchild

tells the story of an old Alice who looks back at her time with Carroll and begins to see their relationship in a new light. It suggests that he was indeed in love with her and questions whether this was inappropriate. Fascinatingly, the film features sequences in which the characters from the Alice books are brought to life through the puppetry of Jim Henson.

Though she was certainly a contributing factor, it is unfair to dismiss Yoko Ono as the woman who broke up The Beatles. It was a long process brought about by growing tensions between the band mates, the stress of recording and touring and the death of their manager Brian Epstein amongst other things. The role of Yoko in all this was the influence she had on the social, spiritual and musical development of John Lennon. He had much faith in the opinions of the Japanese-American conceptual artist, whom he met in 1966 at one of her exhibitions. They had become lovers and Yoko helped him develop his pacifism and spiritual outlook. He demanded that she had a say in the artistic process of the band, much to the chagrin of the others. After the breakup of The Beatles, the two had more room to work together and promote their ideas and music. Five years after Lennon was assassinated in 1980, the film John and Yoko: A Love Story

came out on television. It tells about the two artists’ tumultuous relationship. The film was made with the co-operation of Yoko and she controlled the song rights, giving rise to suspicions that the film is too one-sided and positive in its portrayal. 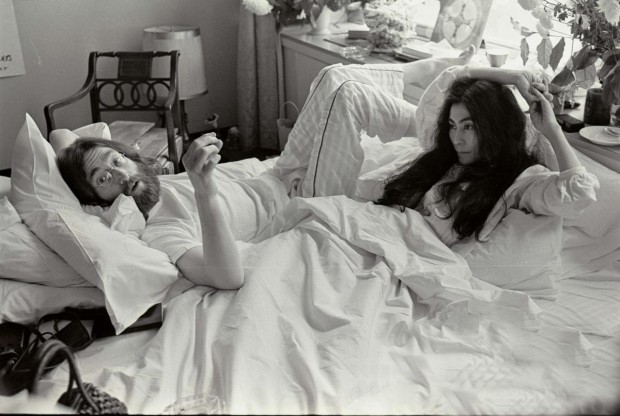 Born a commoner in England in 1765, Amy Lyon was an alluring beauty who managed to capture the hearts and passions of many noble men. Still in her teens and with aspirations for the theatre, she was hired by Sir Harry Featherstonhaugh as entertainer for a months-long stag party. Amid the debauchery, she got pregnant by her host and simultaneously became the mistress of one of the guests, the Honourable Charles Francis Greville. He moved her into one of his houses and persuaded her to change her name to Emma Hart. Greville wanted a portrait of Emma and sent her to George Romney, a painter friend of his. Romney, incidentally a distant ancestor of former US governor en presidential hopeful Mitt Romney, quickly became obsessed with her. He painted her many times, often dressed as mythological Greek women. The paintings by Romney helped catapult Emma into high society. She became not only famous for her looks, but also her wit, intelligence and elegance. When Greville shipped her off to his uncle Sir William Hamilton so he could marry a rich young heiress, Emma began an affair with and later married the uncle, thereby becoming Lady Hamilton. After they were only married a couple of years, Emma met legendary Admiral Horatio Nelson. The two fell in love and started an affair, tolerated by her husband and Nelson’s estranged wife. They became an infamous celebrity couple, known not only for their individual accomplishments but also for the nature and excesses of their relationship. Of course, it was bound to end tragically. After the deaths of both her husband and Nelson, Emma wound up alone and in deep poverty. She died of dysentery at the age of 49. The testaments left to her beauty are the paintings of Romney. 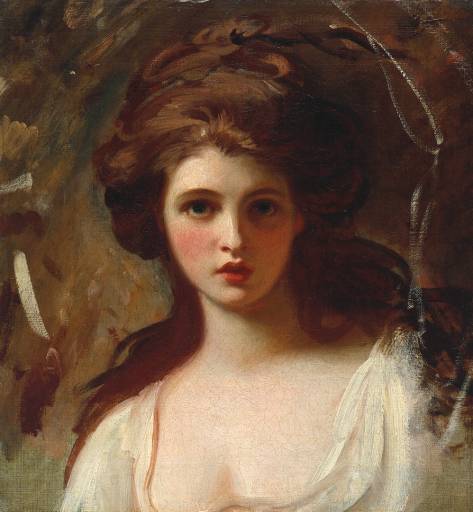 Emma as the sorceress Circe

Her life inspired several films, the best of which is undoubtedly 1941’s That Hamilton Woman

with Vivienne Leigh as Emma and Laurence Olivier as Nelson. Though the film glosses over Emma’s salacious earlier life and generally paints the main characters in a more positive light than is strictly factual, it is a beautiful picture that captures many aspects of Emma’s life and character. The film does not actually feature George Romney, but he is mentioned at the beginning of the film as William Hamilton and a friend admire one of the artist’s paintings of Emma. A bit of a cheat in the context of this article, yes, but this muse’s story was too good to be left out because of some triviality.

After his death in 1827, a letter was found among the belongings of Ludwig van Beethoven. It was a love letter he wrote in 1812 but did not appear to have sent. It was addressed to an anonymous woman whom he calls his “Immortal Beloved” (“Unsterbliche Geliebte”). There has been much debate among scholars who this mysterious woman could be. The most likely candidate is Josephine Brunsvik, a Hungarian countess whom Beethoven sent many more love letters to. They met in 1799 when she was 20 and he became her piano teacher. Though there was an attraction between the two, she was given in marriage to the older Count Joseph Deym. When the count died only five years later, Beethoven and Josephine started an affair through passionate love letters, but pressure from her family caused her to end it. Beethoven composed several works for her. There are other candidates for the title of “Immortal Beloved”, such as Giulietta Guicciardi, whom he dedicated his Moonlight Sonata to, and even Josephine’s sister Therese. The 1994 film Immortal Beloved

, starring Gary Oldman as Beethoven, is about the search for this anonymous woman. Though the mystery was actually never solved, the film does come to its own conclusion. The woman here determined to be the “Immortal Beloved”, though, is quite a controversial choice.