Hundreds of books have been written about storytelling, mostly covering the writing aspect of it. But what about after the writing is over? This article covers some of the technical tricks filmmakers have used to enhance their storytelling and some examples of films which use these tools effectively.

The first trick that has to be discussed is film itself. Although the technique for mimicking movement has been around for centuries, historians agree that the birth of cinema was the 22nd of March 1895 when the Lumière brothers showed their first film La sortie des usines Lumière à Lyon (Workers Leaving the Lumière Factory in Lyon, 1895)

Although the Lumières hoped that their invention would bring in a lot of money (and it did), they did not see a long lasting art form, but a mere illusion that people would be sick of in the long run. Subsequently their efforts would be described as mundane by modern standards, but seeing a train riding past projected on a large screen was a spectacle for the people at the time.

One of the first that truly saw this new invention as a storytelling medium was fellow Frenchman Georges Méliès, who used his experiences as an illusionist to create the most fantastical films within a few years after the gestation of the medium. At first he still had a hard time to let go of his past as a Magician, using the stop-trick technique which he invented to get the effect he wanted.

But soon he abandoned mere trickery in pursuit of storytelling. His most famous film is a great testament of this. Le Voyage dans la Lune (A Trip to the Moon, 1902) shows how far cinema had come after a mere seven years after the Lumières one minute documentary.

With Le Voyage dans la Lune, Méliès brings every technical trick he knows to the table, from the relatively simple stop-trick to elaborate matte paintings, many of which are still used to this day. The film was a resounding success and although not everyone may know Méliès’ name, this film secured his legacy as one of cinema’s greatest innovators. A wonderful tribute to this science fiction masterpiece is the video of the Smashing Pumpkins 1996 smash hit Tonight, Tonight.

But the advances in technical storytelling did not stop with Méliès. To create a coherent story with different scenes a film needs to be edited. Two major schools of editing emerged in the first two decades of the twentieth century; The Montage movement with Sergei Eisenstein as its most famous follower, which used hard cuts to make people aware of the medium, and the D.W. Griffith school of thought that proposed the opposite. Not to go into too much details about the technical aspects, but for mainstream cinema the ideas of the Griffith movement are used without fail. The Montage movement quietly disappeared, but gained a new lease of life with Jean-Luc Godard’s A Bout de Souffle (Breathless, 1960), who used the jump cut extensively to create awareness of the medium and, as legend has it, to cut the film to an acceptable size.

Example of a scene with several jump cuts:

Going from the eye to the ear, for more than 30 years film existed without the accompaniment of sound, so piano’s and organs were commonplace in the early movie theatres to serve as background music tot the cinematic spectacle. Some theatres used live sound effects to draw in the crowds and the film studios experimented with sound, but none were able to pull it off until The Jazz Singer (1927).

Not a very good film by most standards but revolutionary for the simple fact that it showed people on film talking to each other. But like La sortie des usines Lumière a Lyon, the film was too much about the technique instead of the story. A film that brilliantly incorporates sound into its storytelling is Fritz Lang’s M (1931) where a pedophile is recognized by the tune he whistles while abducting a young girl.

The advent of sound did not just end the career of many piano players; actors were also suddenly expected to act more natural and abandon the cinematic pantomime that was developed in the soundless years. Some big stars like Buster Keaton and Gloria Swanson disappeared out of the public eye for decades, while others became even more popular. One of the most famous examples is Greta Garbo’s Anna Christie (1930), whose talkie premiere was even used as an advertisement: 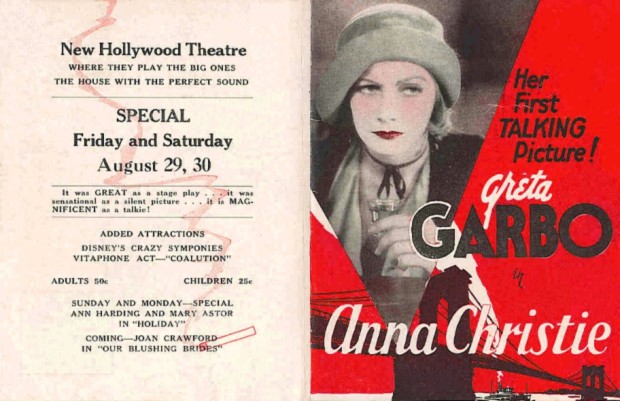 The film was a smash hit and cemented her reputation as one of the greatest stars in Hollywood. Garbo understood that by speaking English she would alienate a large part of her audience so Anna Christie was also recorded in German to accommodate the European fan base.

The greatest silent film star of them all shared Garbo’s problem and he found his solution in humour. In City Lights (1931), Charlie Chaplin uses sound, but to comedic effect.

It would take up to 1940’s with The Great Dictator for Chaplin to fully embrace sound, but like all great artists he did so to maximum effect with the climactic final speech of the film, preaching peace and understanding to a world torn apart by war.

Click here for the second part of this article.