Picture if you will, an alien planet, Earth-like, but with suspiciously styrofoam rocks. A starship officer in a red shirt lies dead. Under a hot sun, Captain James T. Kirk of the U.S.S. Enterprise faces off against an alien threat. On his one side, Mr. Spock counsels him to take a calm and rational approach. On his other, Dr. McCoy calls Spock names and urges the captain to go all-out, to let his instincts and his heart take the lead.

It’s a common scenario, not only in Star Trek

and for Captain Kirk, but for countless other protagonists and their companions as well. The hero is faced with a decision, and his choices are exemplified in the other characters present. Not the specifics of the actions to be taken, but the very nature in which the hero will make his decision – will he be reasoned and intellectual, or will he respond rashly, from his gut? 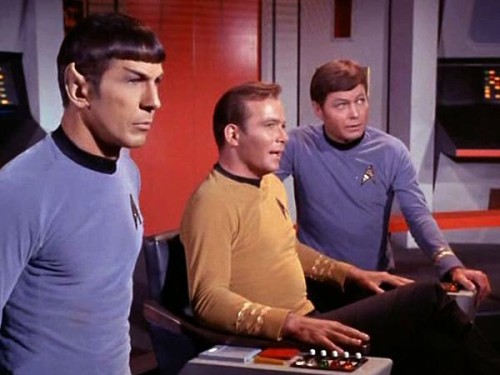 This is the Heroic Trinity, a trio of character archetypes representing the Hand, the Head and the Heart.

To state the obvious, every adventure needs a hero to complete it. And sometimes the hero may stand alone, but in the vast majority of adventures ever chronicled, he or she is accompanied by one or more other characters who serve as foils, sounding boards, or in the case of the Heroic Trinity, as opposing viewpoints which pull the hero into opposing directions.

The hero can range widely in character, from the innocently noble country boy of Luke Skywalker

to the tortured, world-weary fighter of Wolverine

, but there are certain archetypes of the hero which return again and again, everywhere from ancient myth to modern blockbuster. Of course, Joseph Campbell already wrote the seminal analysis on heroic archetypes in his 1949 book The Hero with a Thousand Faces

, which distills thousands of years of heroes into a single “monomyth”, taking apart their journeys and trials to find their shared, underlying meaning.

On a certain level, the archetypal hero is often a generic character. Everyone sees themselves as the heroes of their own life, and this is the character in which most people will recognize themselves. A good way to facilitate this is to keep the hero middle-of-the-road. The companion characters, on the other hand, are entirely free to lean towards extremes. To return to the original example, Captain Kirk is the simple Earth boy who has climbed high despite being of a fairly young age (speaking, of course, of the TV show or the rebooted movies for the latter, and not so much about the aging Kirk of the original run of movies). Meanwhile, Mr. Spock has sworn off all emotion, and while Dr. McCoy has not sworn off reason as such, his responses to Spock’s logic tend to consist of invectives as much as anything else.

Although the comparison to the psychological three-sided division of id, ego and superego is easily made, the relationship between the Heroic Trinity is perhaps best described as that between Hand, Head and Heart. The Head and the Heart may carry strong opinions, but ultimately it is the Hand that must act, and such it is for the hero. 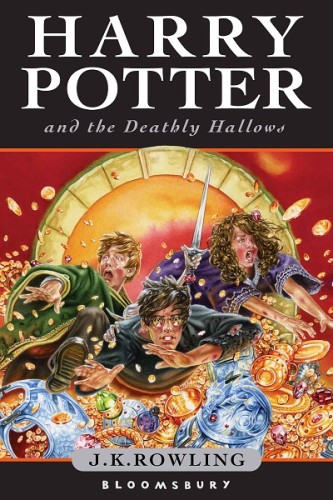 Three is of course a magical number. © J.K. Rowling

Picture an ancient, British castle in use as a boarding school. Staircases move about freely overhead. Standing face-to-face with some magical creature or other are Harry Potter

, Ron Weasley and Hermione Granger. Ron and Hermione suggest opposing courses of action, and – if given half a chance – devolve into a loud argument about it. But almost always, it is Harry Potter who decides what is to be done, and who plays the hero.

When searching for these archetypes in stories, it is important to keep in mind that they are not absolutes. Just because characters fulfill a certain role for the protagonist does not mean that they are one-note. Ron can stop running about and come up with a clever plan, Hermione can lose her head and panic. Different stories and storytellers will play up the characters’ symbolic roles to different degrees, and the characters may even get their own storylines – in which they usurp the Hand’s role for as long as they are permitted. But when looking at the big picture, which in this case is the central arc of the hero protagonist, the companions’ roles should be evident.

At the core of the concept of the Hand, Head and the Heart – or the angel and the devil on the protagonist’s shoulders, if you will – that they represent opposing directions into which the hero is pulled. The nature of those directions can differ, though – intellect and emotion are a common example, but there are others, like for instance desire and obligation. Ultimately, what matters is that the dialogue with (or between) the companions provides a dramatization of the internal conflict with which the hero struggles.

, a Japanese animated series that is not afraid to show obvious symbolism, companion characters Rei Ayanami and Asuka Langley Soryu represent introvertism and extrovertism both in personality and in appearance. The series centers around protagonist Shinji Ikari, an adolescent desperate for affection, from his father or from anyone, and this desire is reflected in all other characters. Where Rei seeks approval by being quiet and obedient, Asuka demands attention by being as loud as possible, and their extreme personalities are reflected in the colors of their hair and clothes – a cool blue and white for Rei and a hot red for Asuka. Over the course of the series, as Shinji struggles to find the right way to handle his life, to run away or to engage in confrontations, the two girls continually provide him with living example – often negative – of what they two paths may lead to. 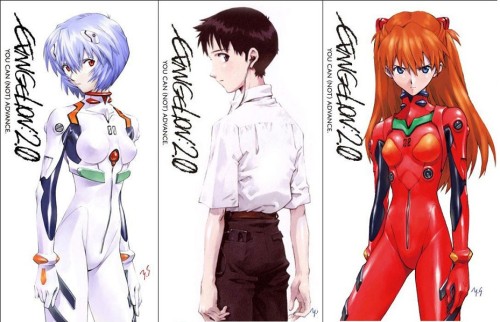 Elsewhere on television, in “Restless,” the fourth season finale of Buffy the Vampire Slayer

, the Heroic Trinity is presented with a twist. In the show, the gung ho Xander Harris and the studious Willow Rosenberg seem like obvious candidates for the roles of opposing influences on heroine Buffy Summers. But when the show plays with the archetypes explicitly in “Restless,” it brings in a fourth character – Rupert Giles, the Mentor. The wise Mentor is perhaps the most archetypal of all companion characters, encompassing everyone from Obi-Wan Kenobi to Gandalf and Dumbledore (and even to the occasional character without supernatural abilities, honestly). But because the Hand by necessity must hold a position of authority higher than or at least equal to the Head and the Heart – as the person making the decisions – the Mentor will rarely be seen fulfilling either role. Often the Mentor maintains a position of impartiality, trusting the hero to come to the right choice on his own. In Buffy, the roles are divided four ways as Hand (Buffy), Spirit (Willow), Heart (Xander) and Mind (Giles). Despite the slightly different interpretation, the character group still functions by and large as a Heroic Trinity accompanied by a Mentor. 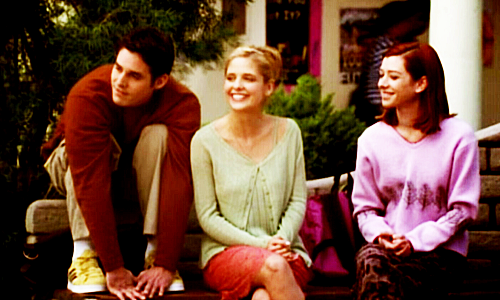 actually has what they call the “Trial of Hand, Head and Heart.” It consists of three separate test which require the three different skills. This is interesting because ElfQuest does not conform to the Heroic Trinity in its main saga – the main protagonist of the comic is without a doubt Cutter, but if there are two main companions in the larger cast of characters, it must be Skywise and Leetah, both of whom most usually play the Head to Cutter’s Hand and Heart. It is in fact during the Trial of Hand, Head and Heart that the Heroic Trinity comes into play in a different fashion, as Leetah is presented with the choice between two suitors: Wild and impulsive Cutter, and respected but perhaps cold Rayek. Although she never takes physical action, Leetah is clearly placed in the role of Hand in the story of her own life. 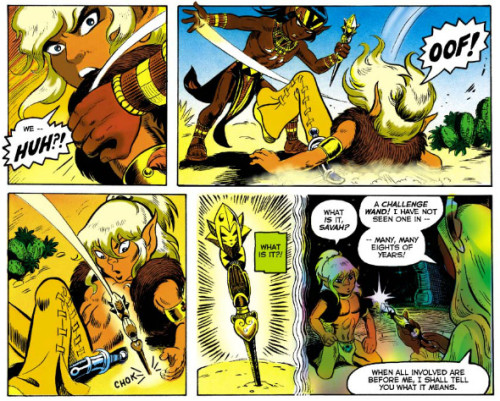 The entire article summarized in a ceremonial wand. © Wendy and Richard Pini

In many cases the duality of the Head and Heart characters is expressed in ways beyond the needs of the symbolism. As mentioned above, in Neon Genesis Evangelion, the difference between the two characters is expressed visually in their color schemes, but the differences don’t have to have anything to do with the characters roles at all. For instance, often one companion is male and one female. (Which may lead to one of them becoming the Hand’s love interest – but since that would bias the hero in one direction, it is not as standard a trope as one might expect. Despite all Xander’s hopes, Buffy rarely showed any romantic interest in him. Despite countless fans’ encouragement, Hermione ended up with Ron.)

So. A hero character needs his companions, and those companion characters often conform to archetypes determined by the roles they fulfill in the hero’s journey. One common and effective grouping of characters is the Heroic Trinity, in which the companions represents opposing traits or ideologies between which the hero seeks a balance. It is a versatile archetype, able to be bent in different directions to suit the needs of the specific hero’s journey. It’s greatest strength – and the key to its enduring popularity – no doubt lies in the way that it makes external a largely internal conflict. It’s nice to see a hero slay a dragon, whether he does it with a magic sword or a giant robot suit, but it is always the desires and decisions that drive the hero to do so that make a story resonate. Thanks to the Heroic trinity, what would otherwise be an internal monologue becomes a lively external debate.